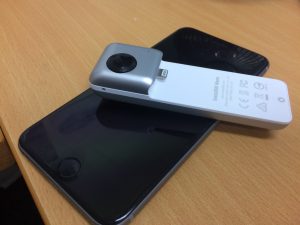 I recently purchased the Insta360 Nano camera for both personal and educational means. First impressions are that it’s pretty easy to use and the resulting graphics are pretty impressive. This is the first 360 camera I’ve used and the idea’s are already starting to fill my head!

I’ve been playing with the 360 video aspect and coupled with H5P I can see how this can be used in an online educational environment. Imagine taking a 360 video or 360 still of a work place with Workplace Health and Safety (WHS) issues strategically placed. You could use Hidden Hotspots to locate and select the issues that need to be addressed. Coupled with an integration with a Learning Record Store like Learning Locker, you have an end to end formative assessment solution with learning analytics.

The Virtual Reality (VR) function with the available app, coupled with the box the Nano came in that doubles as a cardboard is pretty cool and I was able to spin a few people out in my office! 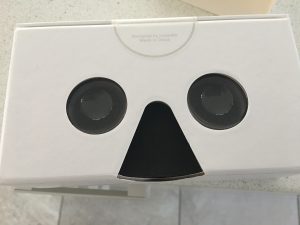 You can share images and videos to the Insta360 site. Below is one of my step-daughter ‘singing in the rain‘ as an example of how it looks in the viewer on the website. At the top of the iPhone simulator, change the perspectives to see what the different ones are like. Use your mouse to move the image around to take a look.

Some items from a beginner that I found that you need to be mindful of:

Overall, I’m pretty impressed and look forward to what I can come up with. Watch this space 🙂

This website uses cookies to improve your experience while you navigate through the website. Out of these, the cookies that are categorized as necessary are stored on your browser as they are essential for the working of basic functionalities of the website. We also use third-party cookies that help us analyze and understand how you use this website. These cookies will be stored in your browser only with your consent. You also have the option to opt-out of these cookies. But opting out of some of these cookies may affect your browsing experience.
Necessary Always Enabled

Any cookies that may not be particularly necessary for the website to function and is used specifically to collect user personal data via analytics, ads, other embedded contents are termed as non-necessary cookies. It is mandatory to procure user consent prior to running these cookies on your website.